A Tradition Worth 40 Years of Remembrance: Turkish Coffee

Turkish coffee, which was included in the UNESCO Intangible World Heritage list in 2013, can be found all over Turkey. Coffee, which has found a place in this culture for centuries, is a tradition that has survived from history and seems to live in the future. 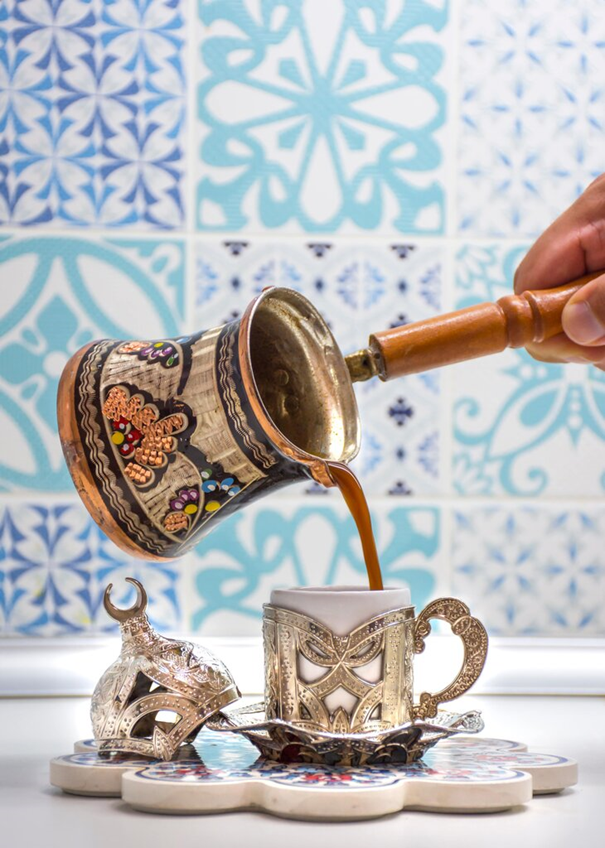 Turkish coffee is originally from Yemen. Coffee whose beans are collected from Brazil; He became famous when Yemen's annexation to the Ottoman lands in 1517, in 1543, the Governor of Yemen brought him to the Ottoman palace. Coffee is very popular in the palace, it is started to be consumed intensively. So how is this coffee brewed, how is it different from the others? This is the most important feature of coffee that is cooked slowly in pots and coffee pots; slow cooking. Two teaspoons of coffee are added to a cup of coffee and the grounds thicken during this slow cooking time. The coffee transferred from the coffee pot to the cup is not drunk immediately. It is expected that the grounds will settle to the bottom and settle. Thus, you will sip a more delicious and dark coffee. According to some, Turkish coffee is very bitter, but this feature of it is loved all over the world.

Shall we give you some interesting information? Europeans met Turkish coffee much later. After the Venetians came to Istanbul, coffee was moved to Venice in 1615. This is the first time that coffee crossed the borders of the country. The first coffeehouse in Venice was opened in 1645. It was opened in Paris in 1643 and in London in 1651. Using the Turkish cooking method, Europeans started to drink Turkish coffee at every meal of the day. In other words, while our sultans were enjoying their coffee in the palace, Europe did not even know about this coffee. They discovered it much later, and now they enjoy coffee too.

Turkish coffee, which has become a culture for us, started to enter people's homes after the palace. So how did this happen? The spread of coffee among the people started with the opening of Kivahan, the first coffee house in the world, in Istanbul Tahtakale in 1554. The first coffeehouses became the gathering centers of people from all walks of life, because coffee is also very popular among the people. Over time, tradesmen's coffee houses, workers' coffee houses and janissary coffee houses are opened in different places. People who socialize around a drink still form the coffeehouse culture we see all over Turkey today.

After a while, coffee culture is reflected in all areas of society. A bitter coffee, mirra, is started to be drunk at funerals in order to share the pain of the host and to say that our hearts will burn. Semai coffeehouses, where evening entertainments are held, appear during Ramadan. The people of Istanbul come together here to drink coffee, listen to fasıls and watch meddahs.

The coffees that spread to the houses continue at full speed in the palace as well. It is written that some sultans drank 10-15 cups of coffee a day. In addition, all guests who came to the sultan were first offered Turkish delight or jam, and then coffee. Coffee fortune-telling also appeared in the palace, in the harem. Coffee was also offered to the guests in the houses along with different treats. Coffee is also famous in the begging ceremonies. The effect of coffee on the culture in Turkey is so much that even words like brown and breakfast are coined.

Today, if you go to a house as a guest, the first thing offered to you is Turkish coffee. This tradition, which is special with everything from its coffee pot to its cups; It has evolved over time, overflowing from houses to coffee houses, and has become a means of pleasure and socialization. In order to understand how effective that tradition is, let us remind you of the aphorism that coffee expresses a very precious status and value given to the other party: “A cup of coffee has forty years of memory.”

Shall we continue with another delicious tradition? Our summer, which smells like sherbet with its history and a wide variety of recipes, There's a Lusciousness at the Table: Ramadan Sherbets

İstanbul Under My Wings: The Fascinating Story of Galata Tower

If you want, let's get to know Galata tower, which makes İstanbul feel under your wing. There's so much to tell.

Our Vialand Theme Park entrance ticket competition has concluded. You can reach the information of the winning families by clicking on our article.…

How To Be Happy and Healthy Through Cycling?

Pedaling has many benefits, both mentally and physically. Let's examine the benefits of pedaling together.