Once a sleepy farming community, Dalyan is now increasingly becoming a destination for organized excursions while maintaining a calm and relaxed atmosphere. Dalyan means “fisher dam” in Turkish. From the sea, bream and mullet emerge from the rivers where the city and local life flourish. It is a great starting point for those who want to explore the surrounding fertile water areas, especially the Köyceğiz Lake and the turtle nesting areas at Iztuzu Beach. Dalyan’s best-known attraction is the impressive archaeological site of ancient Kaunos, which is close to a rocky wall and is particularly popular with seafaring tourists from Marmaris and Fethiye, especially in the summer afternoons. Dalyan is one of the most beautiful routes in Turkey to stop for a day or a few. We have prepared a few places for you to stop by in Dalyan, which stands out with its villages, ancient cities, waterfalls, and natural beauties.

The unique feature of Iztuzu Beach, which has a length of 4.5 kilometers, is that there is fresh water on one side and salt water on the other. The fact that such beaches, which have very few examples in the world, are similar in Turkey is a reason to visit this place. You may also hear that the beach, which is famous for the Caretta carettas coming here and laying their eggs, is Turtle Beach. The fact that the beach is natural and clean is the biggest factor that attracts Caretta carettas to this beach. We understand that the beach is quite clean and comfortable. The beach is not open to the public from 8 pm to 8 am, so the sea turtles can easily lay their eggs, and it is forbidden to make noise and use lights around it. So go with these factors in mind. The sea is not very deep. Open as much as you want; the water will not exceed your waist. Even those who do not know how to swim can spend time in the sea with pleasure. 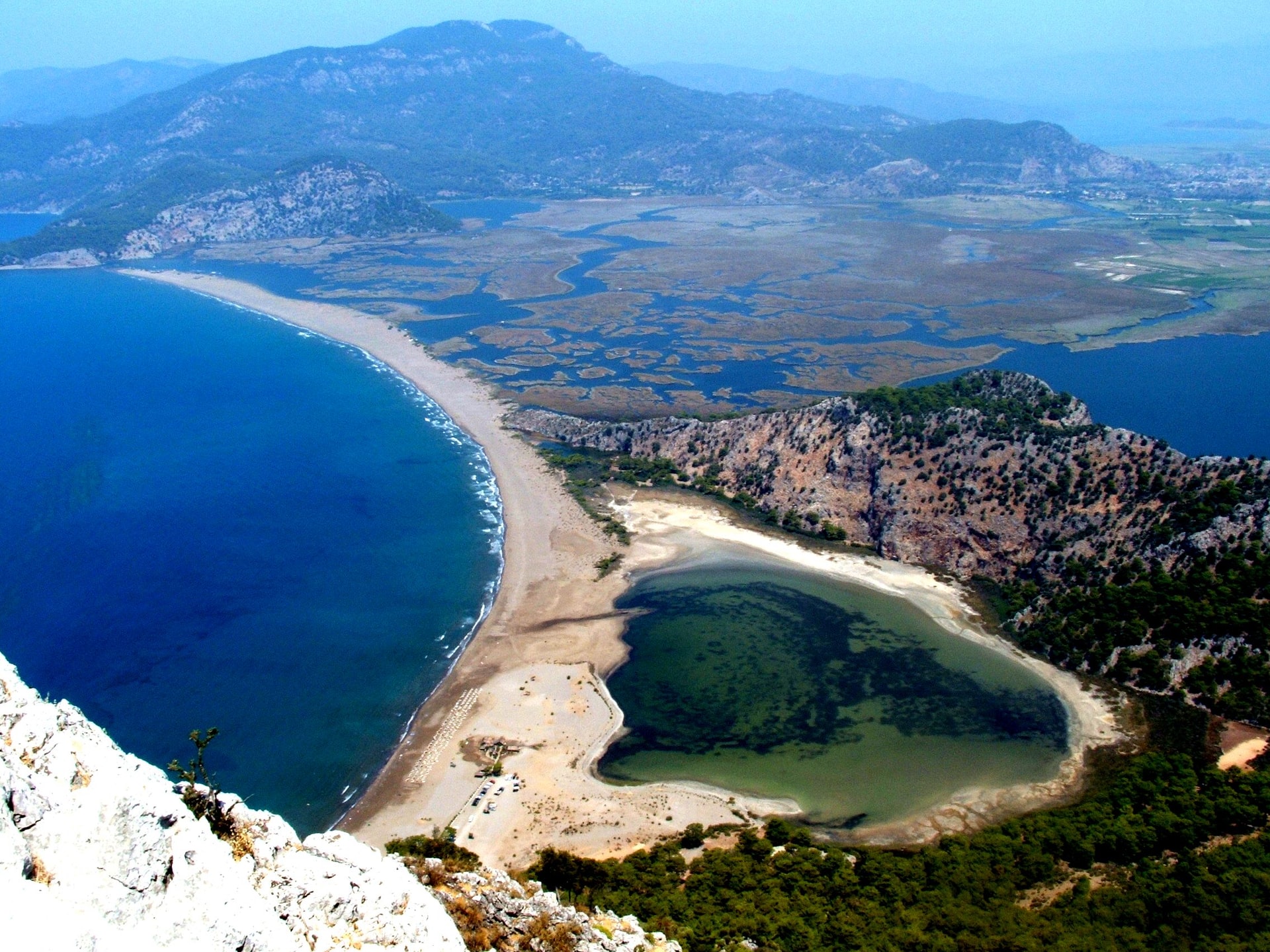 The ancient city of Kaunos, located in Ortaca today, was a port city founded in the 6th century BC. The city was used as a settlement during the Hellenistic, Roman, and Byzantine periods. Kaunos is most famous for its rock tombs. The tombs, which were built in the 4th century, were also used in the Roman period. The fact that they were still preserved after thousands of years increases the interest in rock tombs. Apart from the rock tombs, the buildings in the city are structures such as an ancient theater, a Roman bath, the Holy Temple of Demeter, a basilica-type church, and a fountain. Those who want to visit the ancient city of Kaunos can come here by boat in the region. Visiting hours to the ruins, which are open every day, is between 08:30 am and 7:30 pm. The entrance fee is 20 TL. 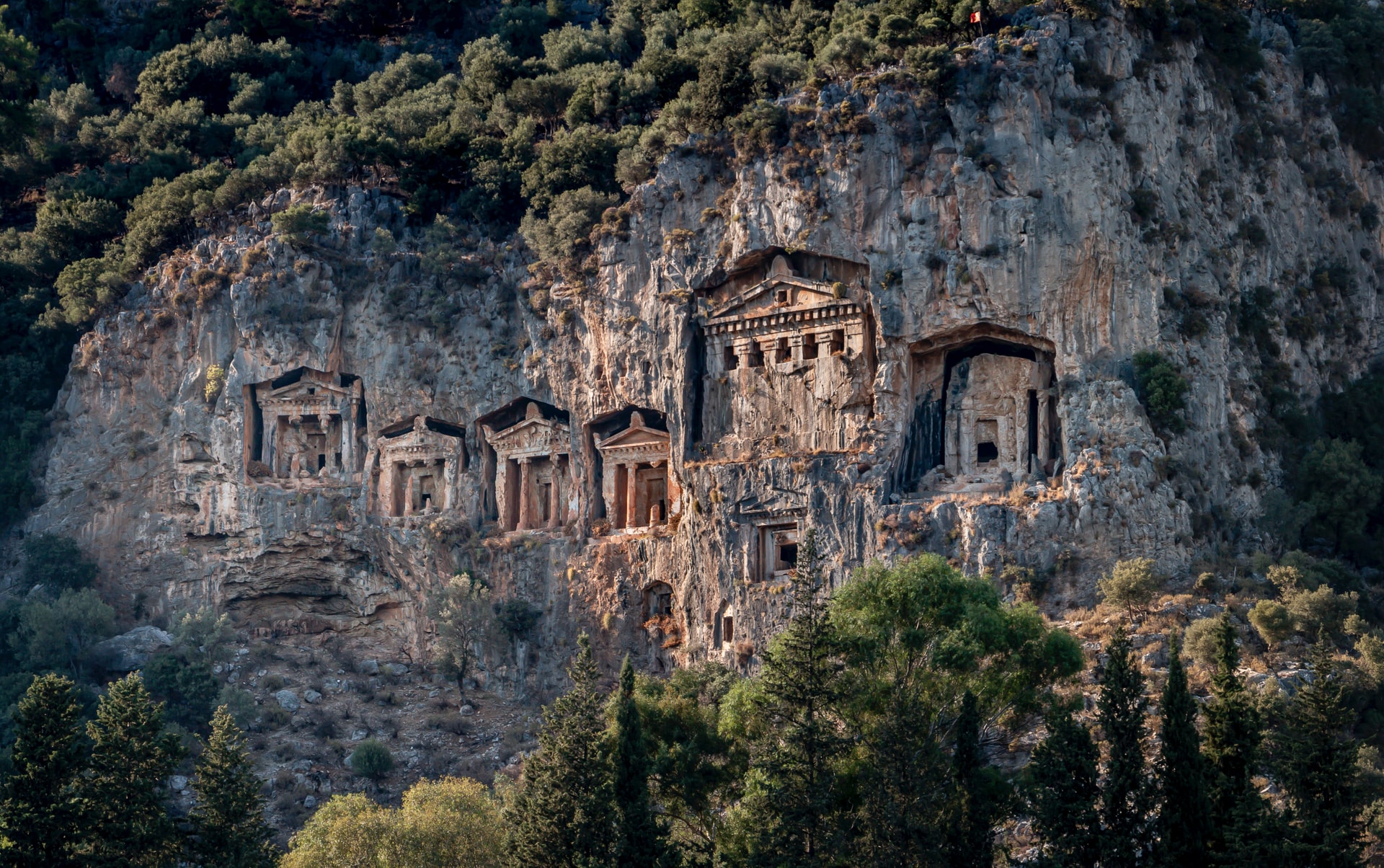 As the name suggests, Sweetgum Forest is in Köyceğiz. You can only see the trees in the forest because the sweetgum tree species is a tree species unique to Muğla. The resin of the sweetgum tree is used in the field of health and cosmetics. The resin of the tree is often used in pharmacy because it heals wounds quickly. Due to the smell of the resin, there is a use in the perfumery industry. So much so that the scientific name of frankincense means “fragrant liquid.” The forest, which consists of trees unique to this region, is only 10 minutes away from Dalyan by car. If you’re thinking of coming to Dalyan, Sweetgum Forest is waiting on your way. You can spend time alone with nature in the forest, which also has special areas for hiking and cycling trails.

Lake Köyceğiz is a great area, especially for those who take landscape photos. A branch of the 6300-hectare lake spills into the sea. In fact, there are too many people who think this is the sea. The only thing you can understand that it is not the sea is the reeds around the lake. There is a prison inherited from the Genoese on the island located in Lake Köyceğiz. Hence, this island is called Prison Island. There are many things you can do on the lake and its sides. Boat or boat tours are organized on the lake. At the same time, if you’re interested in water sports or if you want to try them, you can have the chance to do water sports such as rowing, sailing, and canoeing. Fishing is also free here. Sometimes canoe competitions are also held. Maybe this time coincides with you, too. There is also a wonderful walking route on the promenade by the lake. You can take a walk by watching the view of the lake. 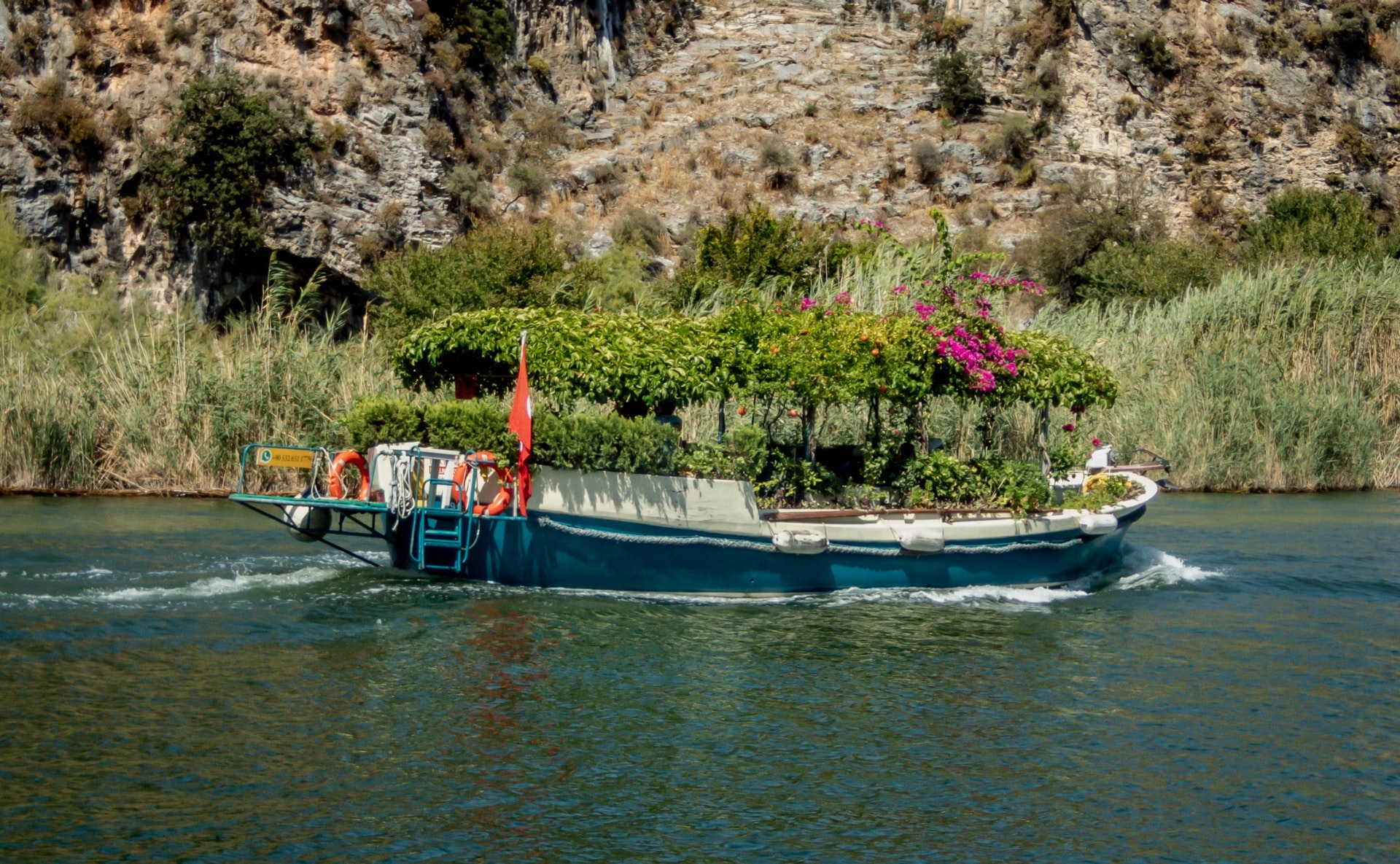 Sultaniye Thermal Springs, which has a history of thousands of years, welcomes local and foreign visitors every year. The reason for this is that it has healing waters. The hot springs located around Ölemez Mountain, close to Lake Köyceğiz, were also used by the people of Kaunos during the Byzantine period. Located 20 kilometers from Köyceğiz, the place is full of people who come to seek healing. Some of the ailments that are thought to be good for water in the place, which stand out mostly with health tourism, are ailments such as rheumatism, joint pain, calcification, blood circulation diseases, and digestive system ailments. Of course, those who come here are not content with just entering the healing water of the spa. By entering the sulfurous mud baths in the region, they can soften their skin and eliminate skin wrinkles. You should go and try the Sultaniye Hot Springs, which benefits people in terms of both health and beauty.

You can reach Radar Hill, where you can have a chance to see Dalyan from above, from the path near Kargıcak Bay. It is quite difficult to come here because it is not possible to go up the hill by car. You have to leave your vehicle after a while because the roads are bad. But the walk you will take with nature will be worth this tiring road. Another way to climb the hill is to go out with safari jeeps arranged by tours. Keep in mind that if you go on a tour, you will have to depend on the group. No matter how tired the visitors are on the road, you will forget the tiredness of the road when you reach the top. When you look down from Radar Hill, you will see that this road is worth walking on. Lake Köyceğiz, Iztuzu Beach, and Dalyan Delta are at your feet. 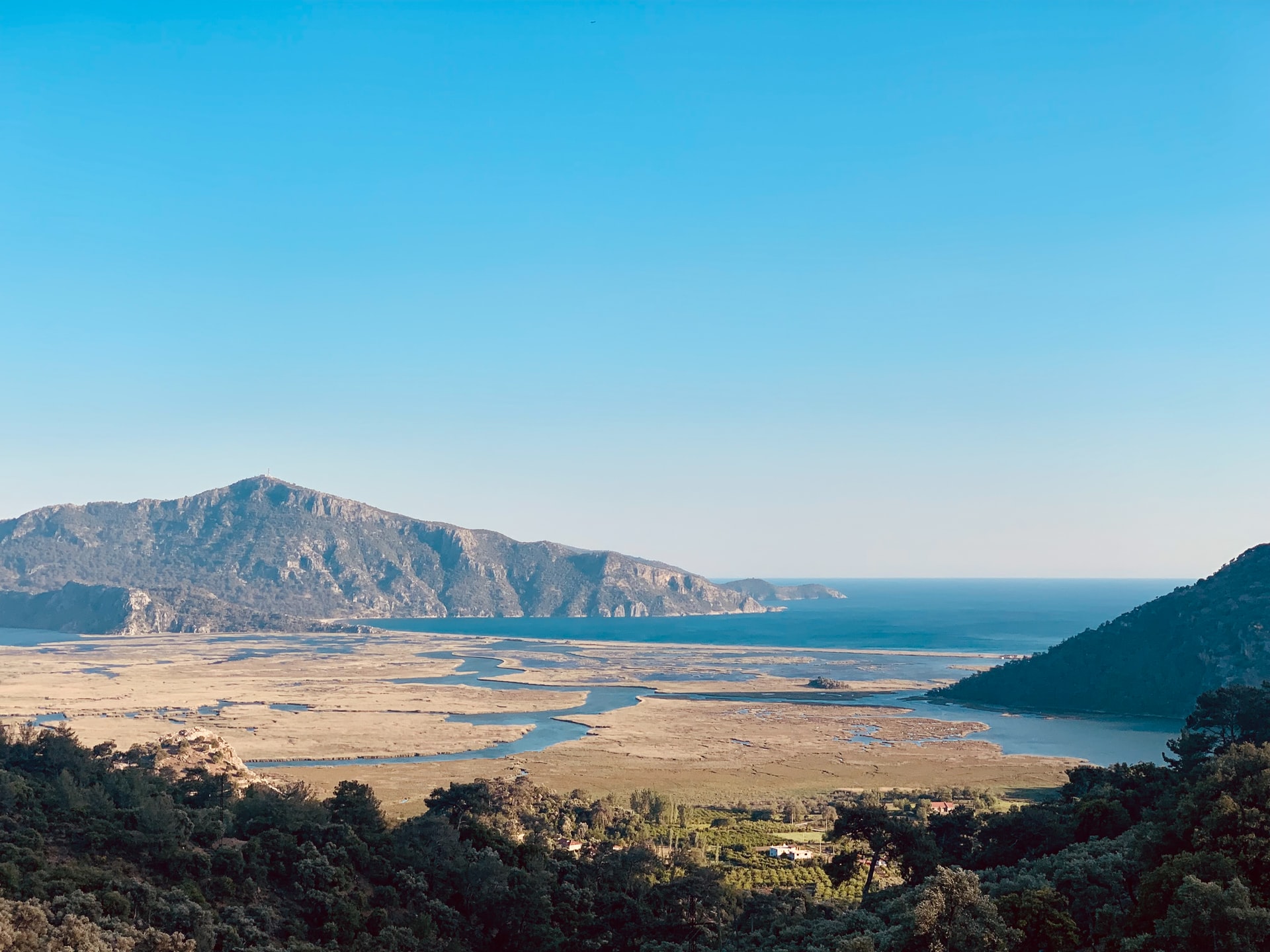