Inspected, designed, and reported by British history and archeology enthusiast Kate Clow, who decided to live in Antalya, on Turkey’s sunny south coast in 1999, the Lycian Way is one of the most popular routes for trekking and adventure enthusiasts. 540 km of paths, dirt roads, and ancient mule roads connecting the cities of Fethiye and Antalya were officially “opened” in 2000, giving life to Turkey’s first long road, the Lycian Way. The 540-km-long route, which is in the south of Turkey and can be traveled in 29 days, is a window to the Mediterranean. Roman roads, ancient ruins, and trails often accompany your journey between the coast and the mountains, where there are strenuous and steep slopes.

The rocky terrain helps you immerse yourself in the harsh reality that has characterized the life of the ancient Lycian people over the years, who have suffered the influence of two powerful peoples, the Romans and Byzantines. Therefore, the trekking route, which has an ancient history, will not only bring you into close contact with the culture of warlike and democratic people and a high standard of living but also keep you alive in the past. So much so that you will trample the same lands that Alexander the Great later marched on to become a province of the Roman Empire.

If we want to talk briefly about the Lycians, they were a people originally from the Anatolian plateau and speaking an Indo-European language closer to that of the Hittites than the Greeks or Romans. Although the Lycians are one of the least known civilizations of the Mediterranean, they are described as one of the ancient “non-barbarian” peoples outside the sphere of influence of the Hellenic-Roman world.

The Lycian Way is one of the most known trekking routes in the world. Along the way, you can admire the ancient structures from the Lycian period and the breathtaking coastline stretching for kilometers in the Mediterranean. You can find some of the places you should see on the road, which include many villages, ancient cities, and beaches. 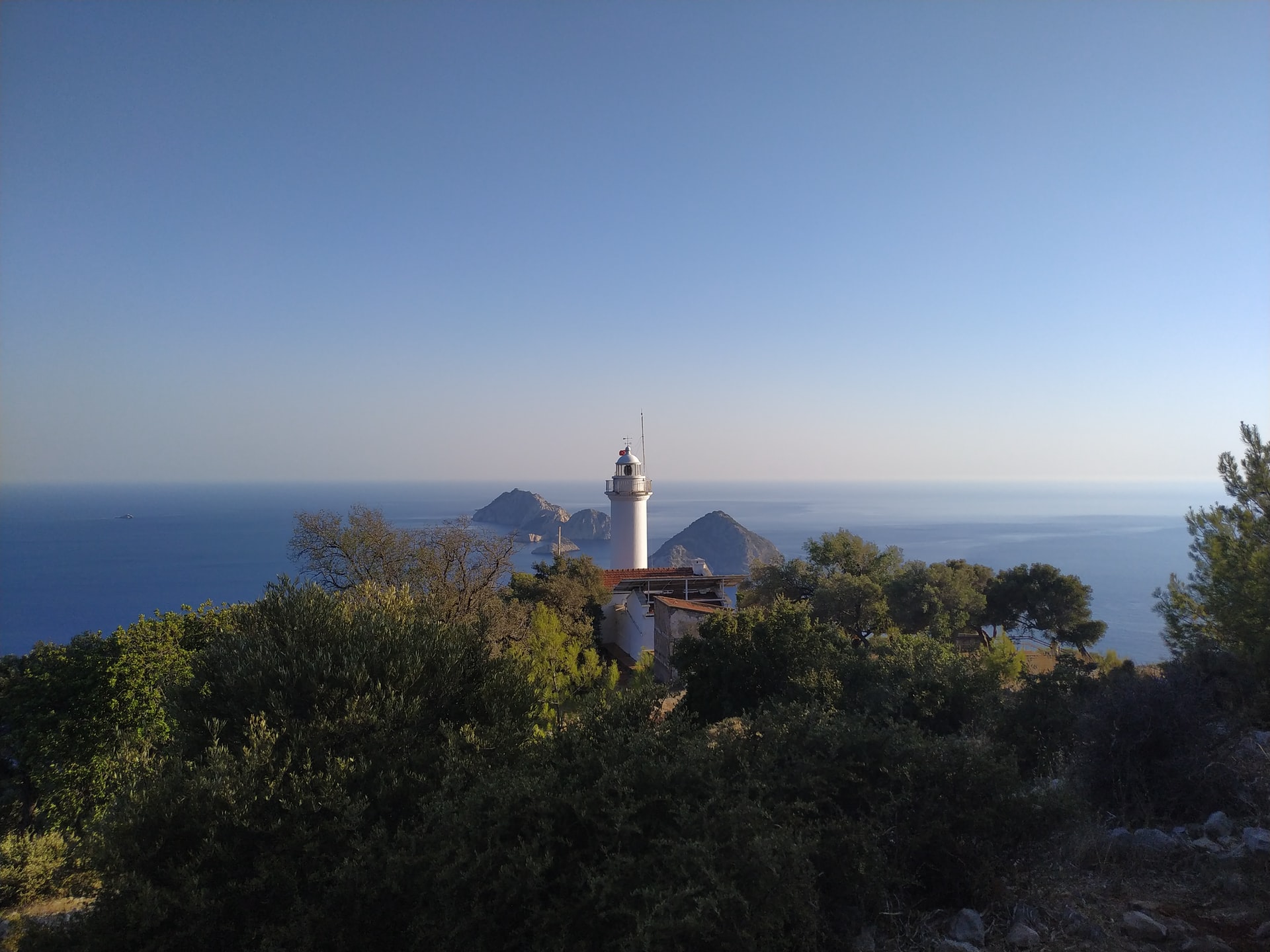 The first place you should see on your Lycian Way route is Gelidonya or Taşlık Burnu Lighthouse. Gelidonya, the highest lighthouse on the coast of Turkey, is in the Kumluca district. The lighthouse, which has been in use since 1936, creates an extraordinary landscape with the sea on one side and the greenery on the other. Tourists also camp in the area close to sunset in order to be next to the Gelidonya Lighthouse and its surrounding scenery, which has been chosen as the most beautiful view of Turkey. With the hum of the wind in your ears and the smell of the sea and greenery in your nose, Gelidonya Lighthouse is the most important stop on the Lycian Way.

The Lycian Way is full of ancient cities. Letoon is one of the most well-known ancient cities you will see on your route. It is a center dedicated to Leto, who got pregnant by Zeus, who is considered the father of gods and humans in Greek mythology. It contains three temple structures dedicated to Leto and his children, Artemis and Apollo. In addition to these, the most striking thing in the place where there is a fountain and a church is the great ancient theater. The reason why Letoon is considered so important is that it was the religious center of the period during the Lycian period. This sanctuary, which was completely abandoned in the 7th century, is one of the most valuable ancient cities in Turkey, which was included on the UNESCO World Heritage List in 1988. The entrance to the ancient city is not free; it is 15 TL. You can enter for free with the Müzekart. The city is open between 08:00 and 19:00 in the summer season and between 08:30 am and 5:30 pm in the winter.

Olympos, which means “high mountain,” was an important port city in ancient times and is approximately 90 kilometers from Antalya. There is also the Akçay River, which divides the city into two, in the place where there are ruins from the Hellenistic, Roman, and Byzantine periods. There is a temple belonging to the Roman Emperor Markus Aurelius and the Sarcophagus of Captain Eudomus at the site. The entrance fee to the Ancient City of Olympos has been determined as 70 TL as of 2022, and the Müzekart is also valid. Even if you only want to go to the beach, where there Olympos Beach is ahead of the city, you have to pay the entrance fee to the Olympos ruins. It is open between 08:30 and 21:00 during the summer period. In winter, it can be visited between 08:30 a.m. and 5:30 p.m. 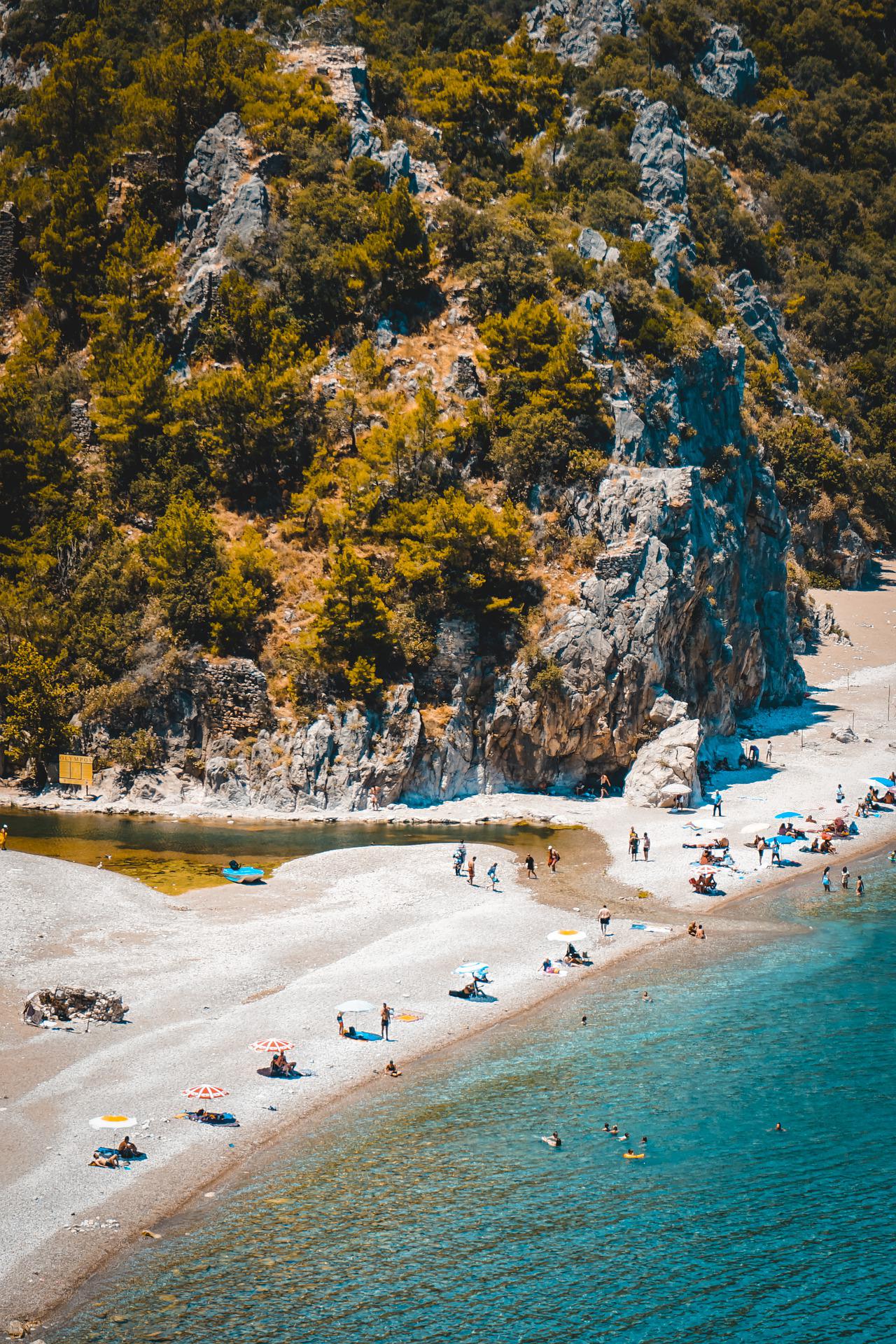 Patara Ancient City, located in Gelemis Village, has hosted many civilizations in history, so it has left countless important structures and artifacts on it. It has a key place in history. So much so that the year 2020 has even been chosen as the Year of Patara. In the place where the excavations started in 1988, structures such as the parliament building of the Lycian League, the theater, the bath, and the 26-meter lighthouse built by the Roman Emperor Nero were unearthed. The first Ottoman wireless telegraph station was also found in the times when the Ottoman Period was in Patara. Perhaps the most surprising and remarkable feature of this place is that it is the birthplace of St. Nicholas, whom we know as Santa Claus. The entrance fee is 70 TL, and you can reach Patara Beach when you proceed from the ruins. This beach is famous for the Caretta carettas coming here. The beach fee is included in the entrance fee.

Saklıkent Canyon, located in the Seydikemer district, is also known as a national park. You will be faced with a magnificent view of the canyon on your walk, where the water will accompany you. It is a natural formation with a length of 18 kilometers and a height of 200 meters. It is not possible to pass through the water due to the heavy water. The entrance fee is 13 TL for adults and 6.5 TL for students. In the canyon, where you will have to walk on the rocks from time to time, you can buy rubber shoes for a fee of 60 TL, or you can rent shoes for half of this price. 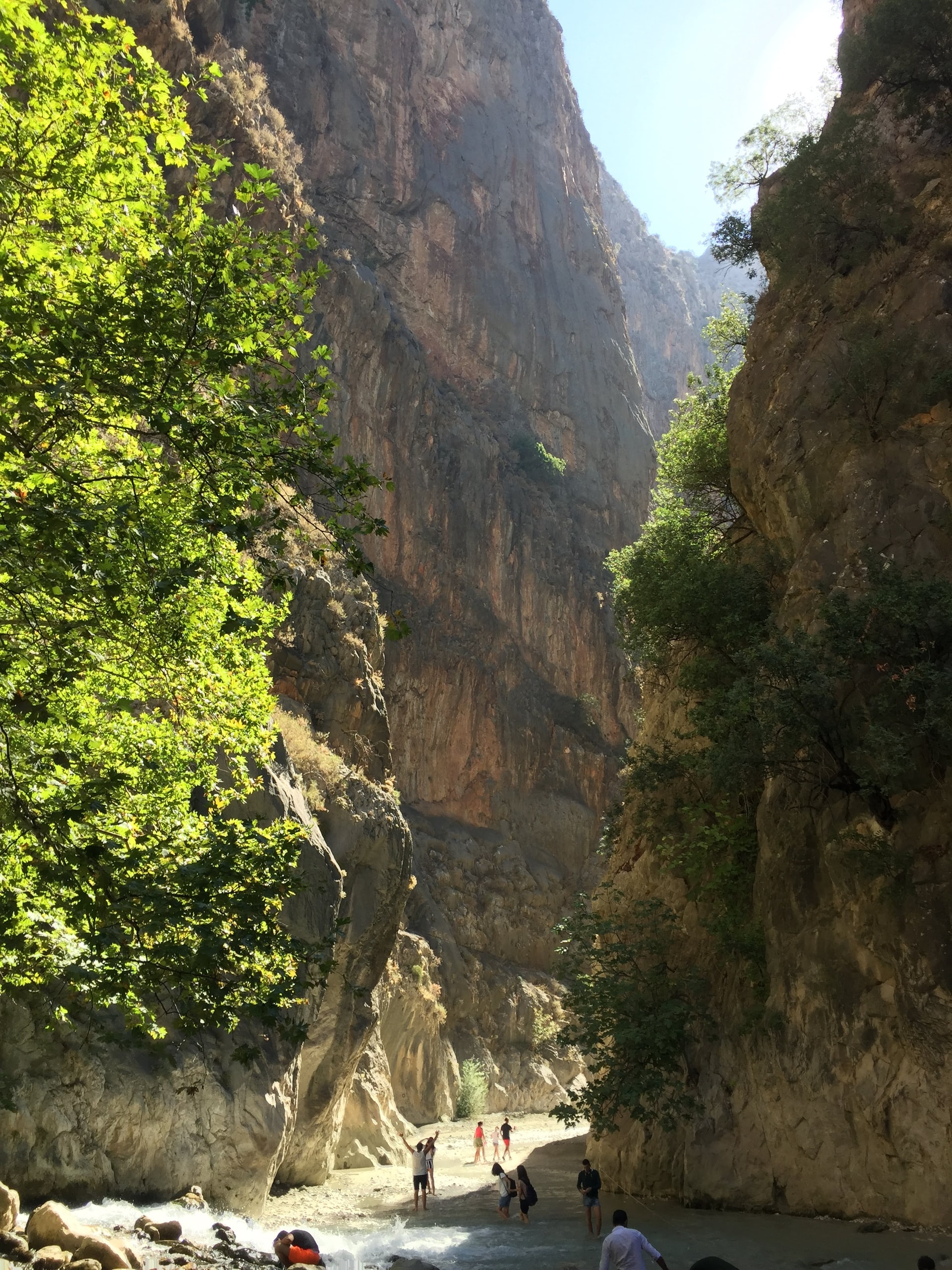 Faralya Village in Fethiye is located at the foot of Babadağ. You can even paraglide in Babadağ in a place that fascinates people with its wonderful view. If you haven’t done it before or if you don’t have much experience, you can do the activity with an experienced paraglider. Don’t pass by there without stopping by the famous Butterfly Valley. The valley, located on the Lycian Way, goes by this name because it houses more than 80 butterflies. If you get the chance to camp in the Butterfly Valley, you can create a wonderful journey on your Lycian Way route. In the Faralya Village, there is also Kabak Bay, one of the important destinations of the Lycian Way. The place, which is generally preferred by an open-minded audience, stands out with its natural beauties and beach.

We recommend this walk to everyone, which is extremely grueling but will allow you to immerse yourself completely in the present and past Turkish culture, to know your limits, and try to overcome them. 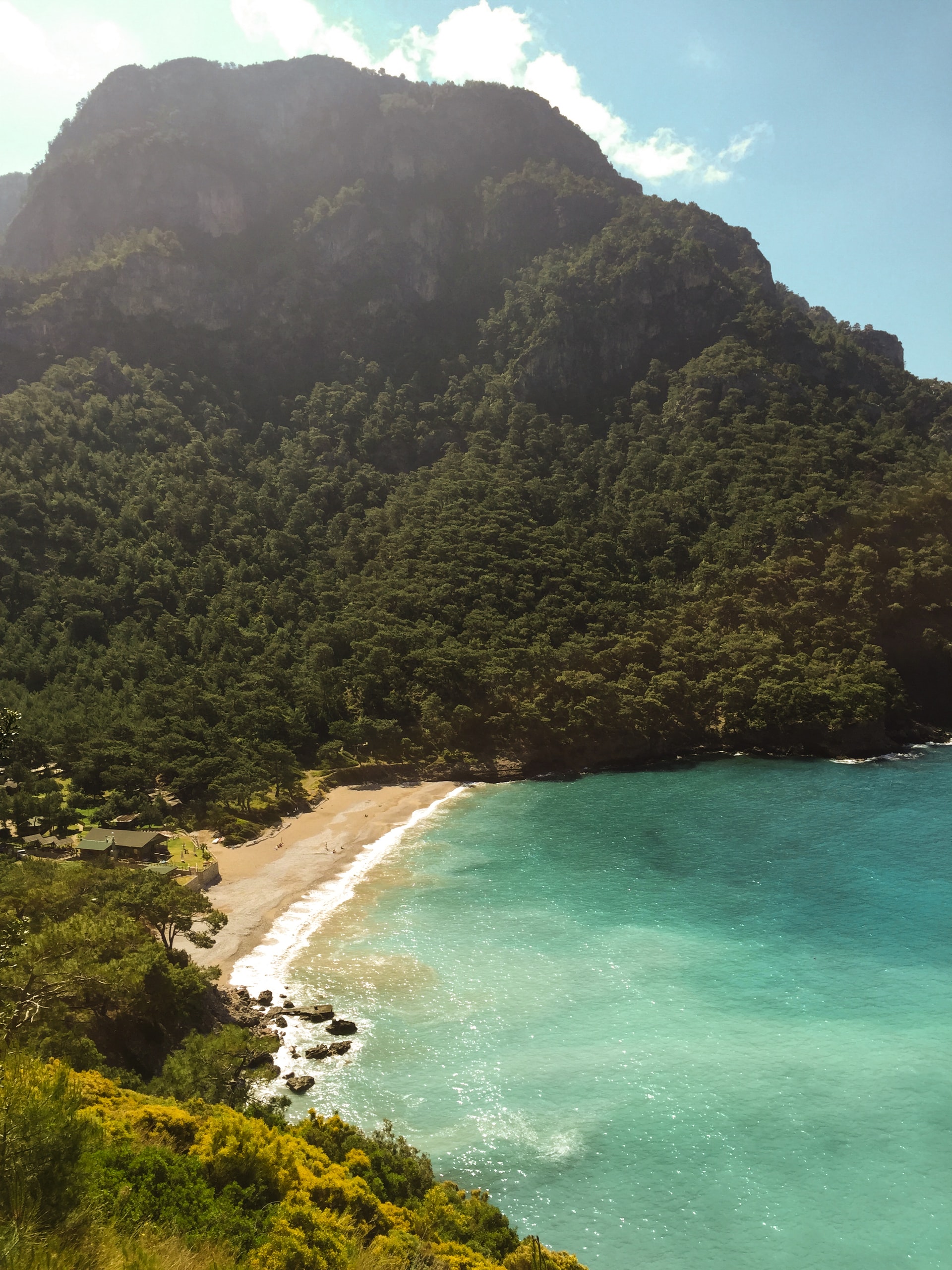 When you say ‘Bodrum,’ it is indisputable that one’s mind goes completely crazy. By going directly into the holiday mode, people forget about the…

If you say that you are passionate about the Aegean and the Mediterranean, and you can never leave blue and green, you should definitely join the…