Puglia is one of the most beautiful and most visited regions of Italy. Located at the southeastern tip of the peninsula and washed by the Adriatic and Ionian Seas, the region offers many attractions to its visitors. Therefore, there is really a lot to see during a trip to Puglia. So, in this article we will try to suggest a list of what to see in Puglia.

Bari, the capital of Puglia, appears to lie on the Adriatic coast overlooking the Balkans. The city is divided between an old part on the sea and a new part extending inland, dating back to the early 19. century. Bari is a place that fascinates with the contamination of ancient and modern culture. In Bari, one can still breathe the air of the East in the narrow and winding streets of the old town. The best way to explore Bari is to walk. Starting from the Norman-Swabian Castle next to the magnificent Romanesque-Apulian-style Cathedral, you pass through the busy streets to reach the Basilica of San Nicola, one of the favorite centers of the Orthodox Church in the West. San Nicola Basilica is one of the most sacred places in the world for Roman Catholics and Orthodox Christians. So much so that the saint's remains are buried just below this imposing basilica built in 1089. Afterwards, you arrive at the Imperatore Augusto Beach, which follows the route of the ancient fortifications between the old and new ports and leads to Piazza del Ferrarese. There are also two famous theaters in the city; Margherita, now a museum, and Piccinni, which has been temporarily closed. 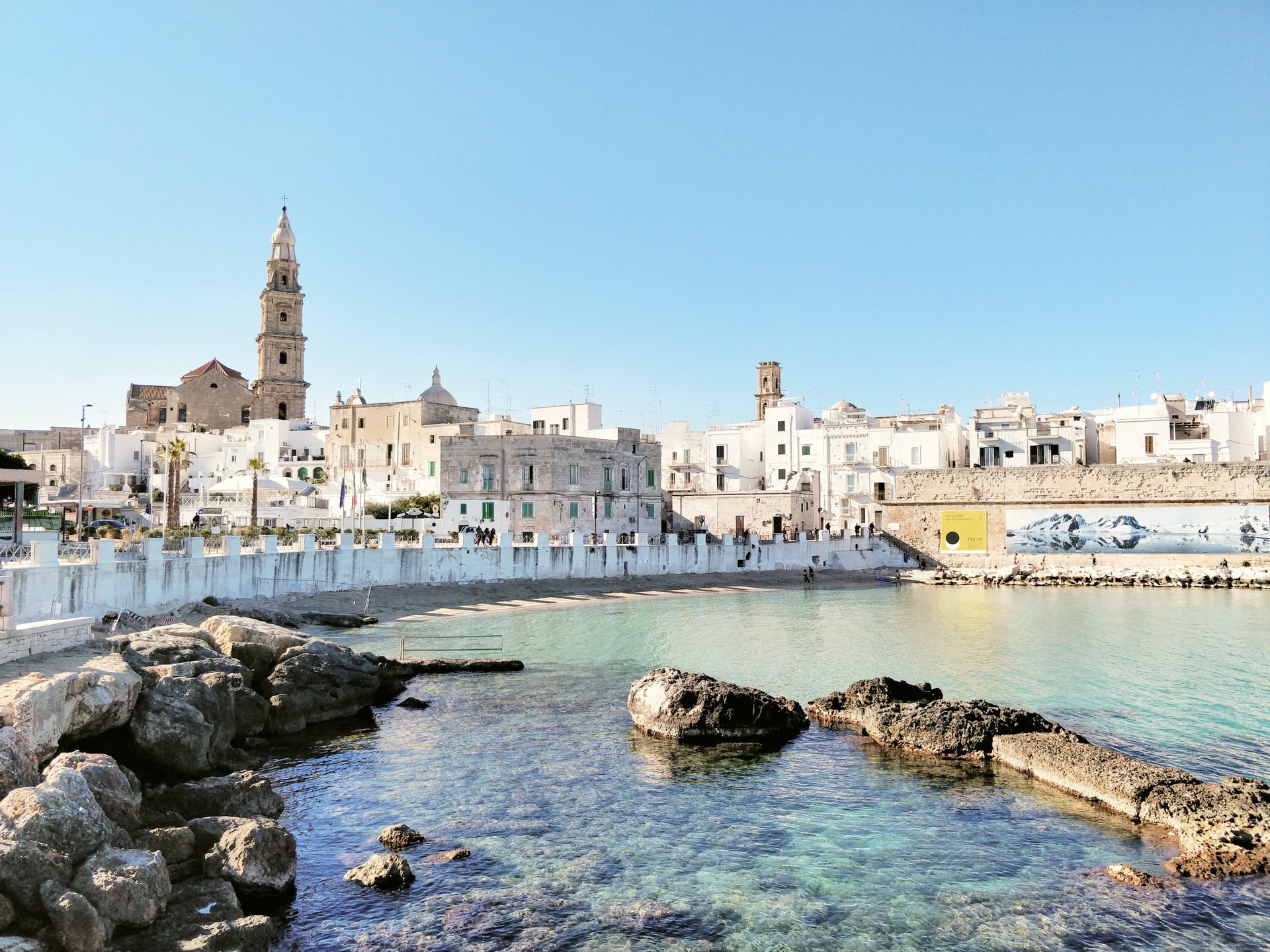 Monopoli is an ancient Apulian city in the province of Bari, located between Salento and the Itria Valley, overlooking the Adriatic Sea. Monopoli today is known for its magnificent coastline with numerous coves hidden among the rocks and surrounded by a crystalline sea. Monopoli's old port is the gateway to the city for those coming from the sea. It is an ancient natural harbor surrounded by historic pale stone buildings with Venetian, Gothic and Byzantine architectural resonances. If you walk along the ancient walls from here and continue along the seaside, you will notice some of the historical towers of the city. Thus, you enter the historic center through narrow streets and arches paved with limestone slabs, dominated by the cathedral of Santa Maria della Madia with its monumental facade and baroque bell tower. Finally, on the promontory called Punta Penna, you'll see the castle of Charles V, a pentagonal shape typical of sixteenth-century castles.

Half surrounded by the Adriatic Sea, but limited to the Tavoliere delle Puglie to the west, the Gargano Peninsula includes the Gargano National Park, charming villages and sea-facing shores. To explore Gargano, you can start from Manfredonia and then continue to the beautiful Baia delle Zagare Mattinata, known for its two buildings Pugnochiuso and Vieste, a picturesque center with tall white cliffs and narrow streets and white houses overlooking the sea. Continue to Peschici, another white village characterized by an intricate network of streets, stairs, arches and courtyards overlooking the blue of the sea and marina. Heading up the beach, you'll arrive at Rodi Garganico, described by many as "Gargano's Garden", an old fishing village surrounded by citrus and olive groves standing on a promontory overlooking the sea. Finally, trekkers can explore the Umbra Forest and climb Monte Sant'Angelo, where the San Pio da Pietrelcina Sanctuary is located. 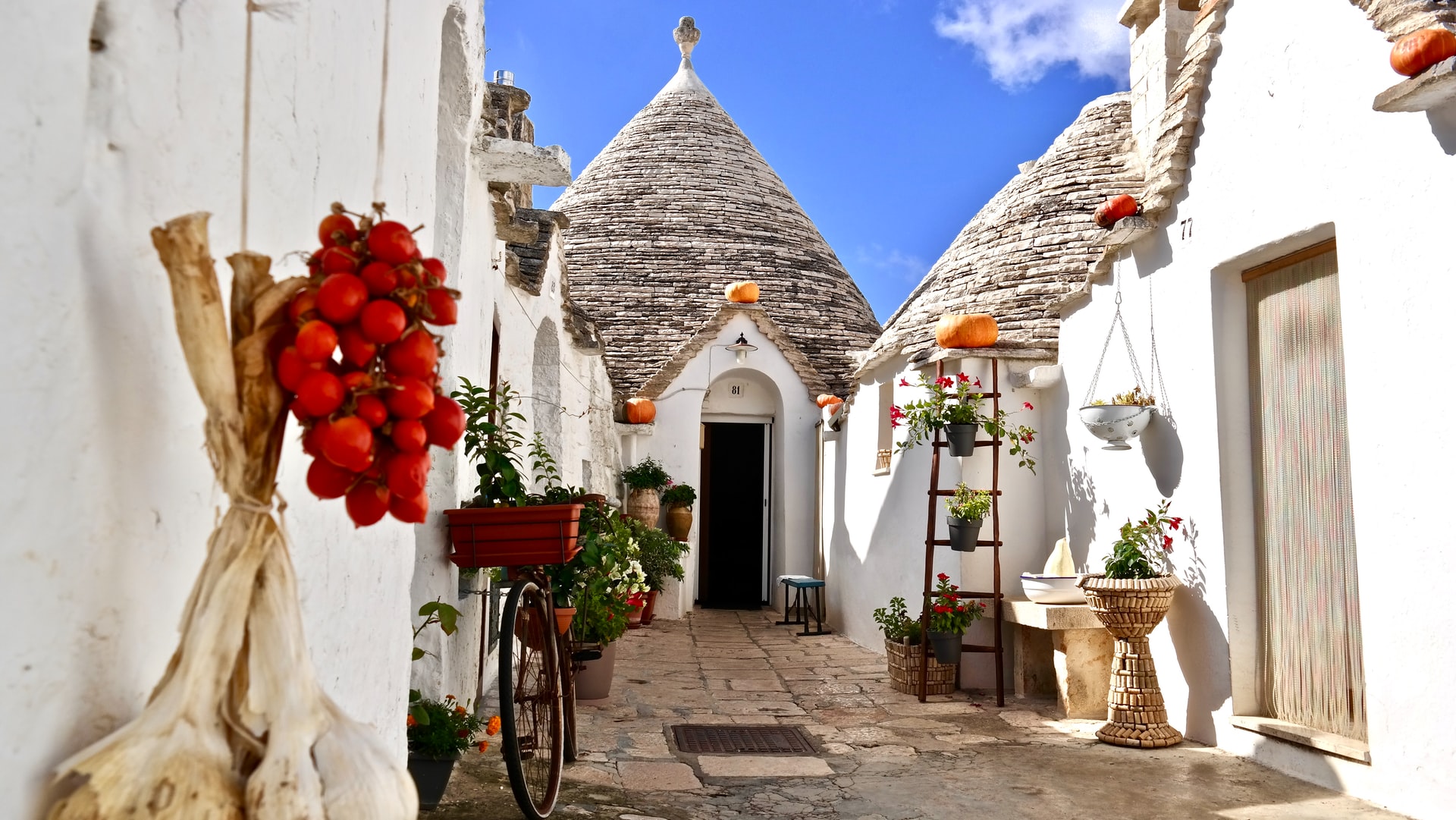 Always considered the Gate of the East, Salento is a magical land of sea, sun and wind. It is a subregion of southern Puglia that forms the heel of the Italian boot. With the Ionian Sea to the west and the Adriatic Sea to the east, the Salento peninsula is known for Italy's most beautiful beaches. Between the high and rocky shores of the East and the low and sandy shores of the West are a sea of ​​olive trees, dry stone walls, farms, baroque cities and millennial villages. A land dominated by civilizations such as the Greeks, Romans, Arabs, Normans, Salento is a treasure trove of history, art, culture, wilderness, and a delicious culinary culture. Next, leave the baroque and stone-working city of Lecce, the capital of the province of the same name and the cultural center of Salento, nicknamed the "Florence of the South". Lecce, where works of art from the Roman, Middle Ages and Renaissance periods meet, impresses with its artistic and architectural beauties. On the Ionian coast, about 40 km from Lecce, is Gallipoli, a fascinating city. Gallipoli is divided into two districts: the historic center, located on a limestone island, and the new village, connected to the island by a 17th-century brick bridge.

The Most Beautiful Villages of Puglia

There are wonderful villages in Puglia. Alberobello is famous for its trulli houses, a primitive architecture that continues to be used to this day as it is the perfect blend of efficiency and eco-sustainability. Locorotondo is located in the Itria Valley and is famous for its pitched-roofed houses that surround the village in a circle. Cisternino is known for its white houses and carnivorous profession. At the town's butchers, you can choose meats cooked on the spot and served in a sandwich. 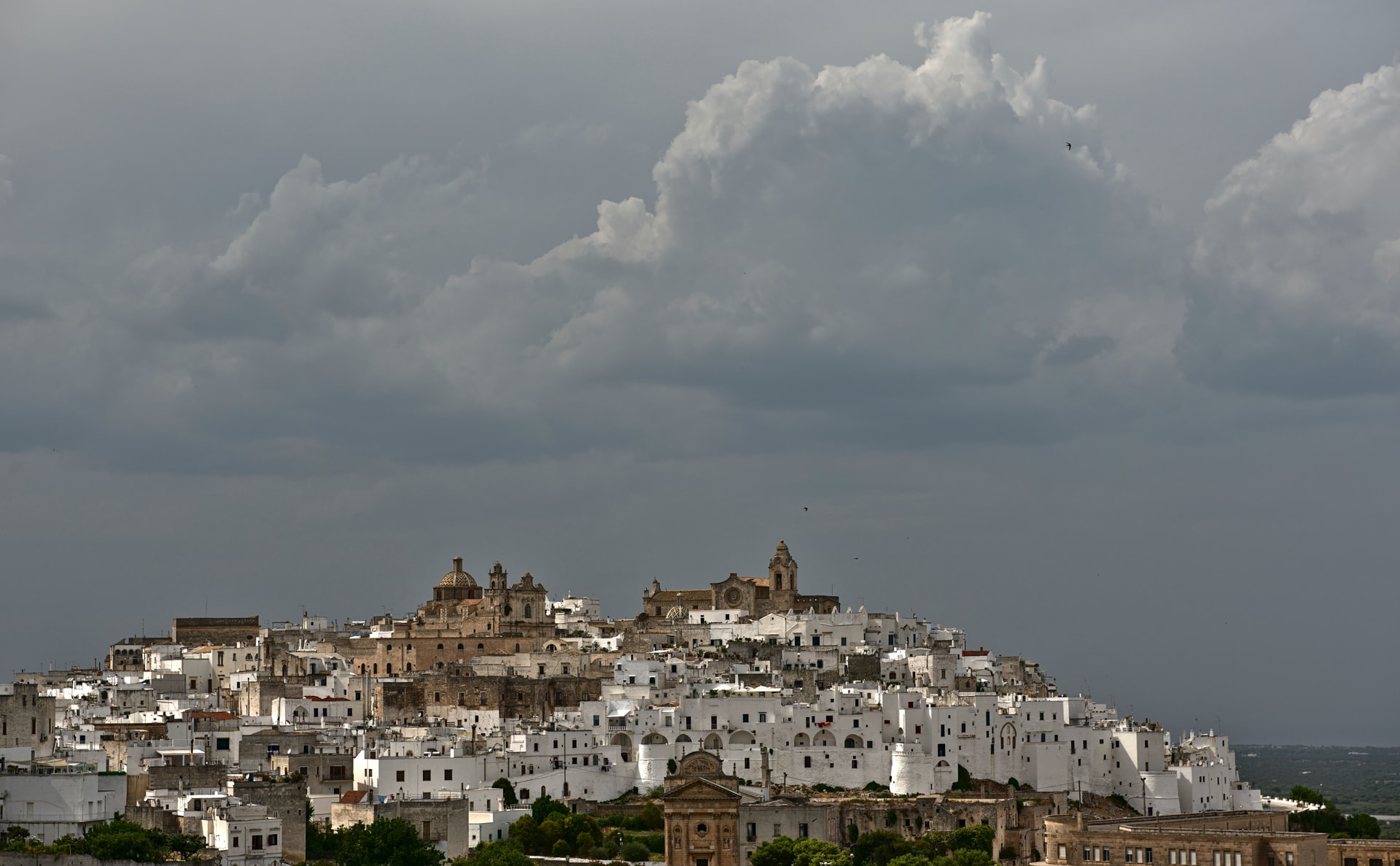 When to Go to Puglia?

Puglia's climate is typically Mediterranean: in coastal and flat areas, summers are hot and airy, and winters are generally mild and relatively rainy. Puglia is an ideal destination all year round. Spring is the best season to visit villages with pleasant temperatures and no peak season crowds. Summer is obviously the season for beach vacations, but if you don't like crowded beaches, it's best to avoid August. In terms of events, Puglia is lively all year round, especially in summer, every little village organizes festivals, parties and the so-called "Tarantula Night", which is considered one of the biggest music festivals in Italy.

What to Eat in Puglia?

Apulian cuisine reworks the Mediterranean tradition with local products and flavors. In Puglia, focaccia from Bari, puccia, orecchiette with broad beans and chicory (a type of pasta), ciceri and tria (pasta and chickpeas, tria derives from the Arabic ytria and denotes pasta), tiella from Bari You should taste (rice). 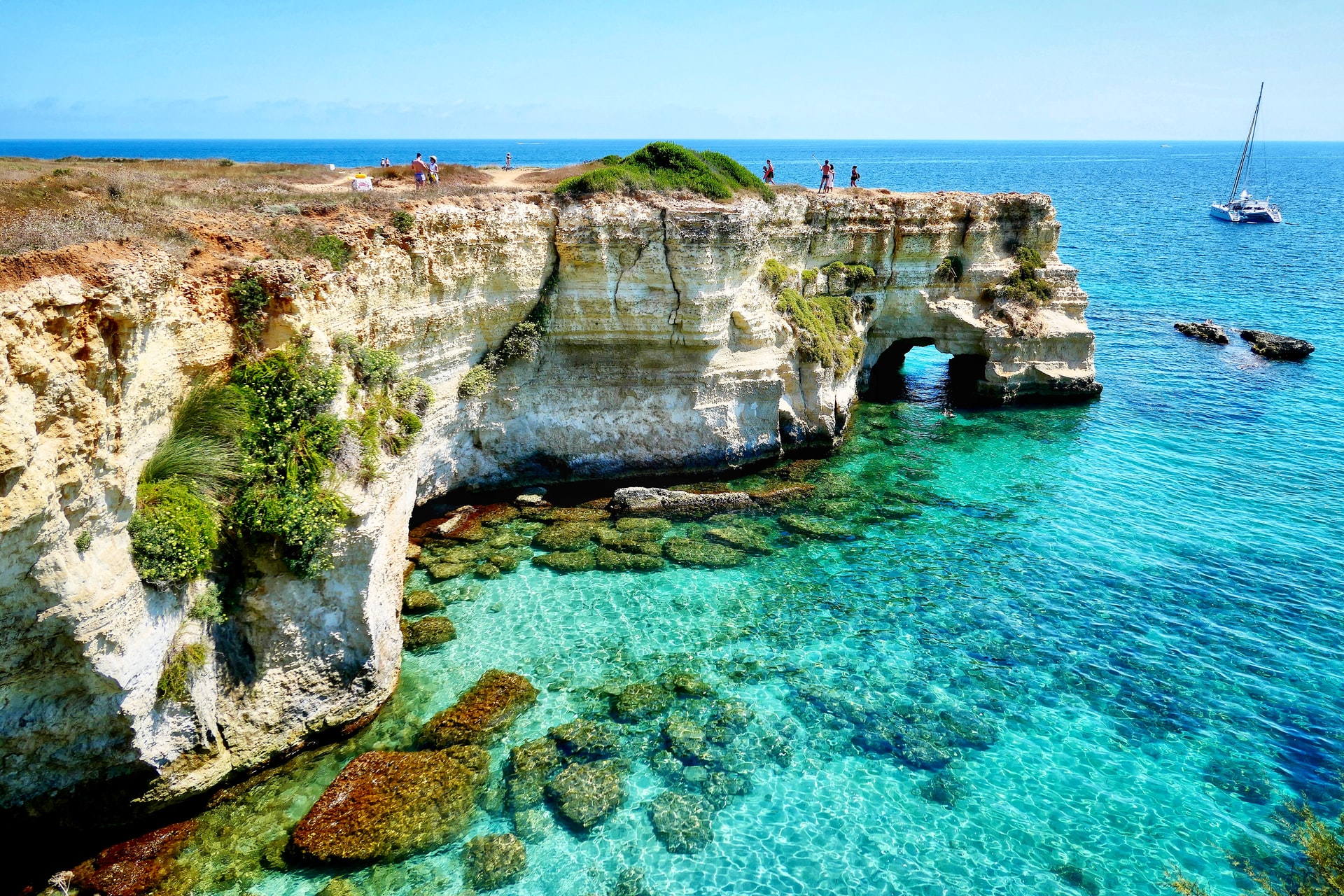 The World’s Most Famous Walking Routes

Walking is one of the most important activities that can be done for both our physical and mental health. Even though we feel like we are consuming…