In the west, east and even every inch of our country, traces of ancient civilizations await to be visited. Archaeological studies and research are on going, although many of them have not yet been uncovered. In this article, we will tell you about Mount Nemrut, one of the most famous landmarks of our country, which is home to a breathtaking view from its summit and attracts people with its mystical atmosphere. If you do not add Mount Nemrut, which was cited by UNESCO as the "Outstanding Universal Value" in 1987, to your list of excursions, you may regret it. 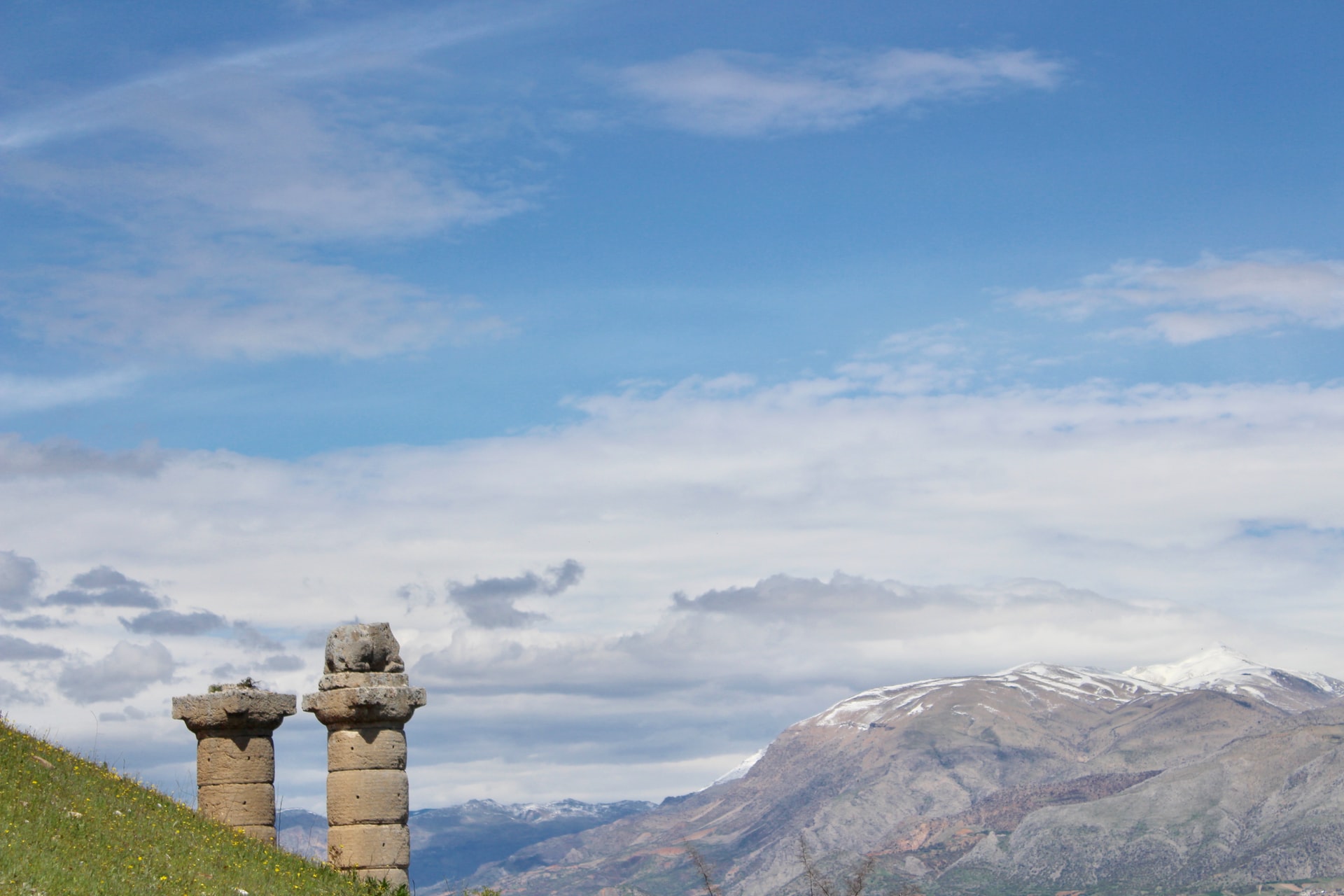 Before you understand Mount Nemrut, you need to take a look at the history of the region it is in. The region, which was between these two great enemies during the Roman and Persian Empires, was formerly part of the Roman Empire, and was later receding after the ruler of the Kommagene region. Mithridates declares independence and the Kingdom of Kommagene is born, which we can say is a complete east-west synthesis.

In 64 B.C., after Mithridates died, his son, 1. Antiochus took the throne and strengthened his country's independence by signing agreements with both empires. But these big steps will be the end of it. Convinced that they were a much stronger and harder-to-defeat country than they really were, Antiochus was deposed by the Romans in 38 B.C.

Mount Nemrut and the Ancient Statues on It

The mysterious and fascinating mound, named after The First Antiochus, head of the Kingdom of Kommegene, is a feature that makes the 2150-meter peak of Mount Nemrut important. Legend has it that deep inside the man-made mound is the tomb of Antiochus. However, the fine archaeological work does not yet show any sign of a tomb, which adds a different mystery to the mystery of the mountain.

Of course, we cannot go without mentioning the huge stone statues that come to mind when it comes to Mount Nemrut, which is an important place in Turkish tourism. These majestic works of art are lined up to celebrate the glory of Antiochus and the gods.
Archaeologists say Mount Nemrut is of sacred importance to locals. Therefore, under the spell of himself and the importance of his kingdom, King Antiochus, perhaps seeing himself as a wife to the Greek gods, built his tomb in a sacred place right next to the gods, which he regarded as an eternal resting place. 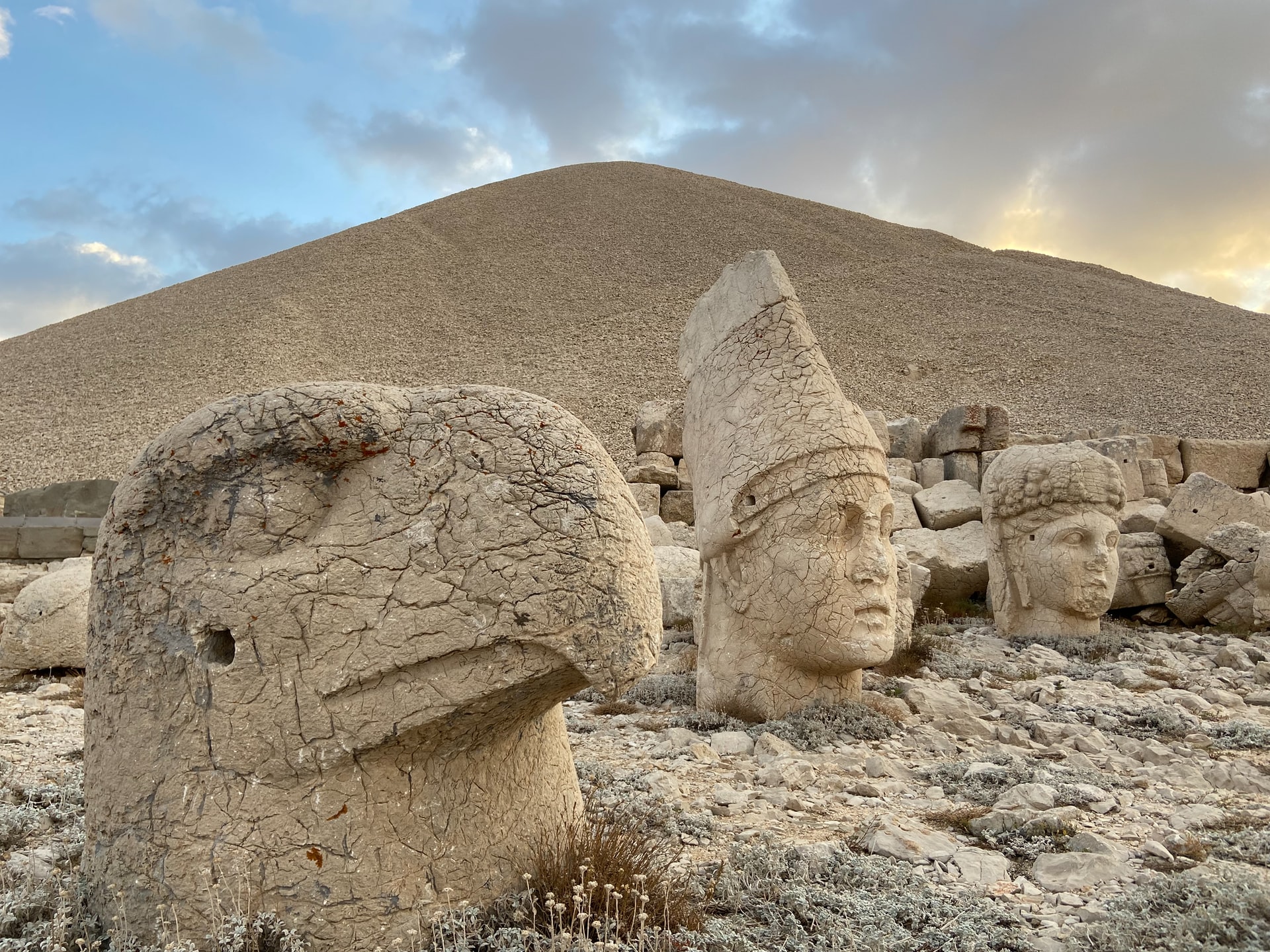 The integrity of the statues, which are one of the most interesting structures of the Hellenistic period, is waiting for visitors on the eastern terrace of Mount Nemrut. Almost all of them are on the ground with their heads separated from their bodies. All the gigantic faces are waiting facing the main altar.

While the statue of the eagle, the messenger of the gods, represents the celestial powers; The king of animals, the lion, symbolizes the power of the world. There are statues of eagles and lions, as well as mythological depictions of gods. Among the gods worshipped by the Kommagene people at that time; There were Zeus, Heracles, Hermes, Apollo, Ares, Mithras and, of course, Komagene. Antiochus himself is represented in this section. The broken reliefs tell the story of Antiochus' lineage. On the north side is the father's side, which describes his Persianness, while on the other side is the mother's side, which shows the Seleucid lineage. 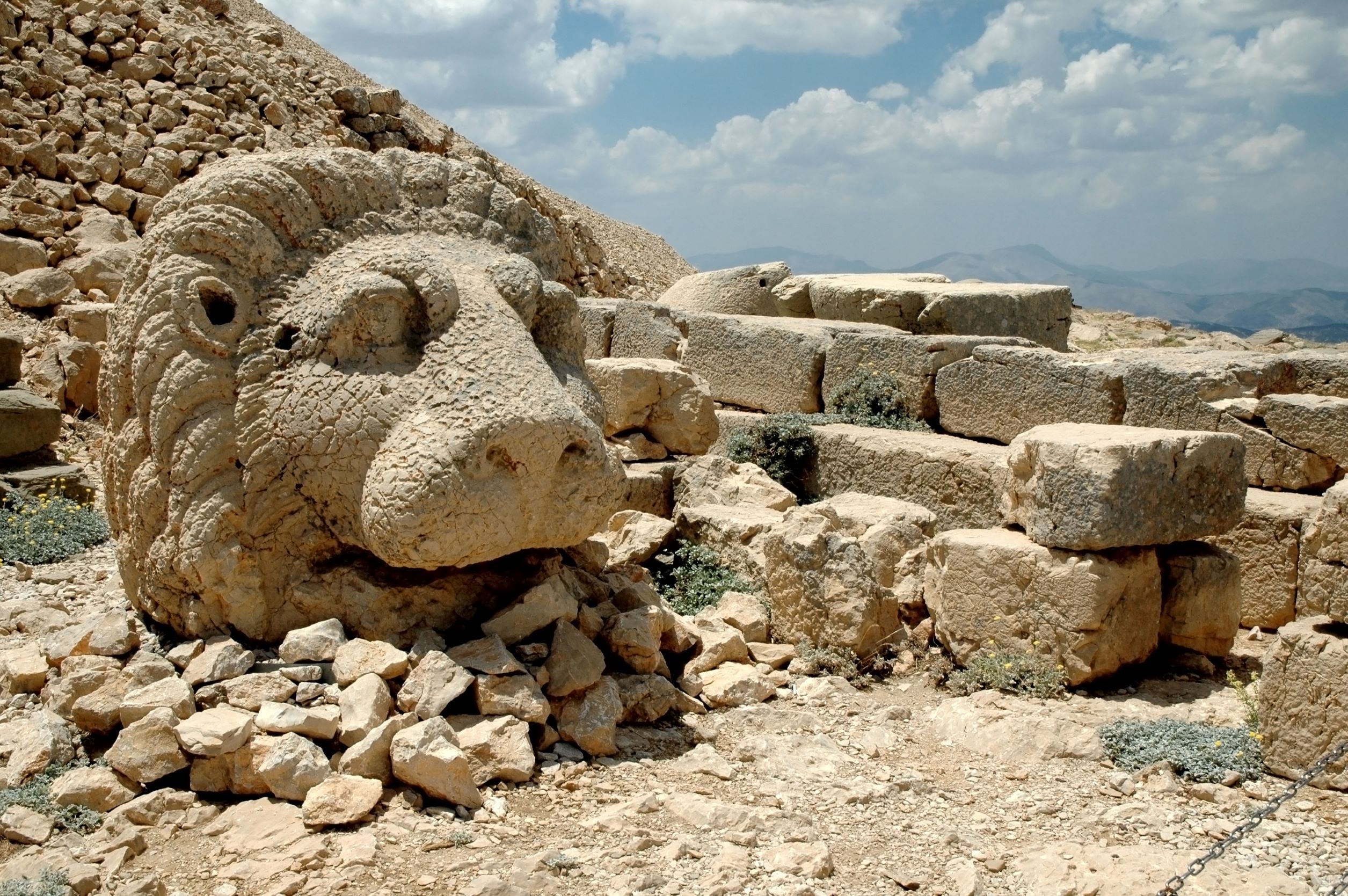 Although we say that, sculptures are less protected in this part, the heads of the statues are much better. The Western section, where you can see the statue of Leo, symbolizes the honor of Antiochus with its astral motifs.
Behind the huge thrones in both the East and West are a 237-line inscription written in Greek letters. This inscription describes the historical aspects of the creation of this region above Mount Nemrut, a new religious community and the will of King Antiochus.

Why Were The Statues Destroyed?

These statues, believed to be about 50 meters when they were first erected, were the general place of worship of this unique mountain when the Kingdom of the Roman Empire invaded, and the statues on it were abandoned to their fate and, over time, became their present appearance. 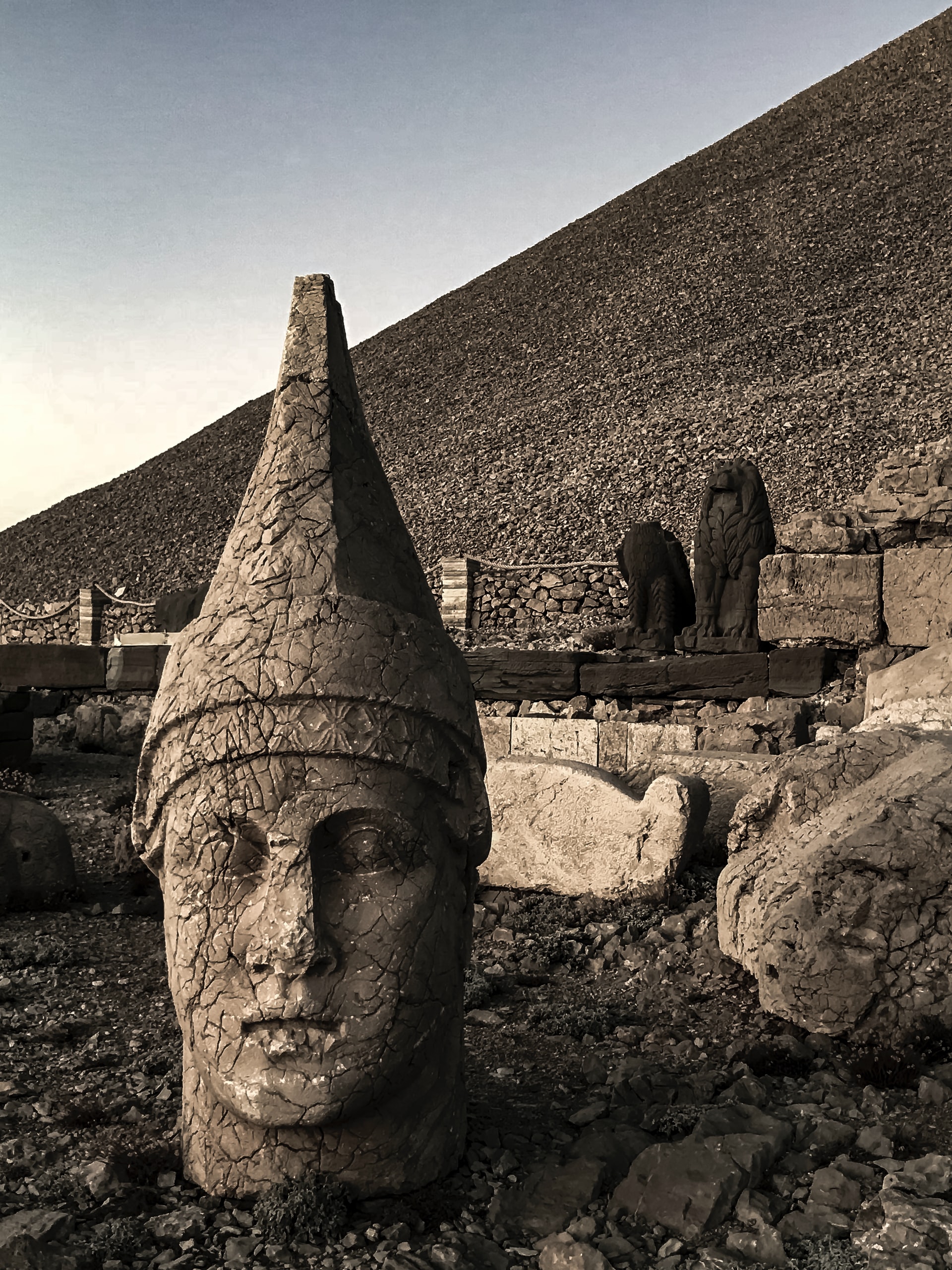 The area was excavated in 1939 by Friedrich Karl Dörner with systematic research. Although the work continues over the years, with the comprehensive plan prepared by METU in 2006, excavations in and around Mount Nemrut gain speed and detail and continue to be continuous today.

Getting to the Region

Mountain 30 miles from Kahta. It is worth noting that the months in which access to the region is quite difficult during the winter months are May and October. There is also a walking distance of 600 meters from the car park at the summit to the terrace with statues and mounds.

Adıyaman, Kahta and Malatya are the closest settlements to stay. Among these three, Kahta is much closer than the others, but if you want to stay in a place where you will be comfortable like a hotel, We can say that Adıyaman offers more options to stay to you. If you have a car, transportation will not force you from all three regions. If you want to stay even closer, the inhabitants of a small village called Karadut at the foot of the mountain will be happy to welcome you to their guesthouse, and the village organizes tours and transportation so that you can witness the sunrise. 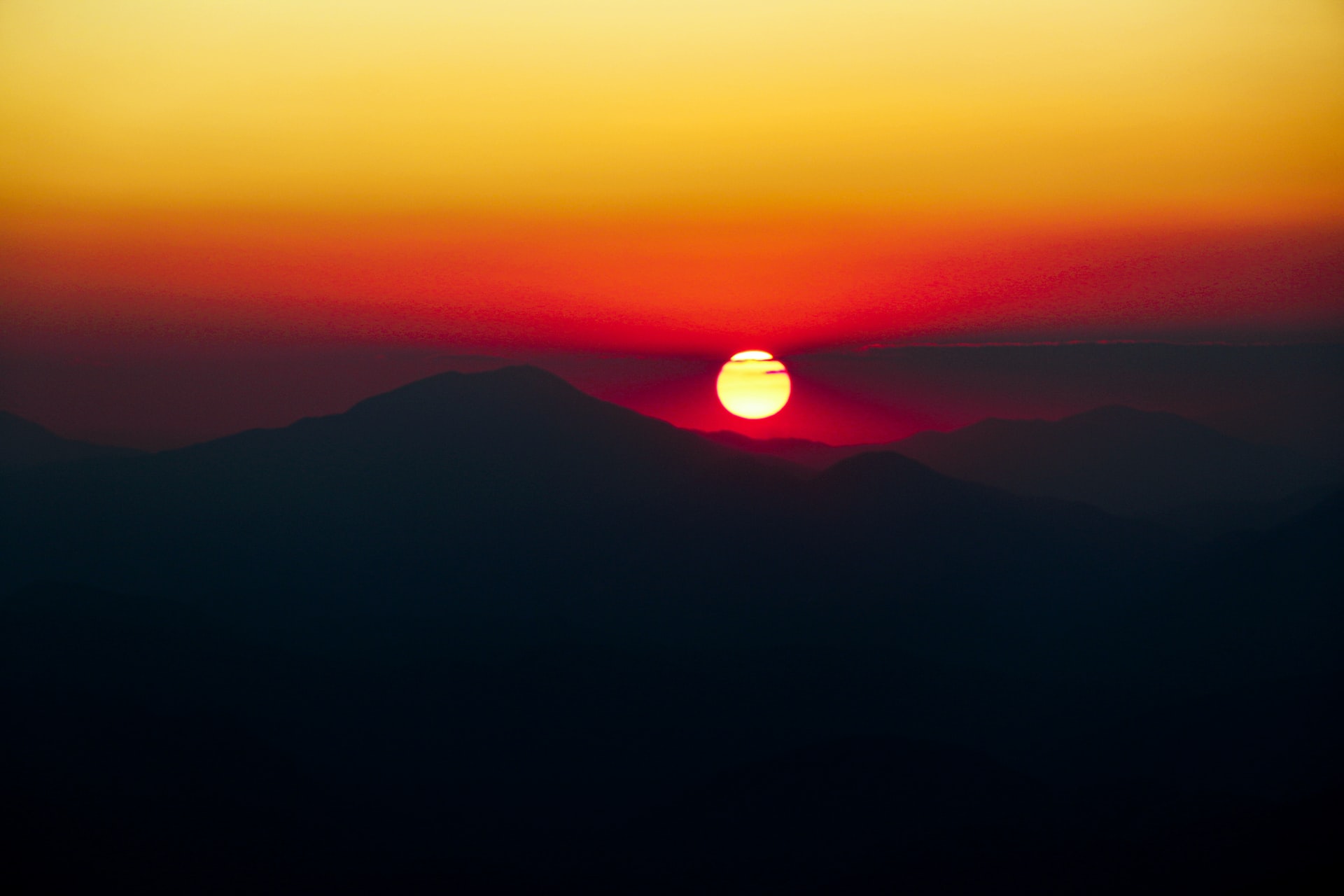 If you've come all the way to Mount Nemrut, it's kind of an unwritten rule to wake up early and cross the road to the top and witness this legendary sunrise. Those who can't get up early can watch the equally legendary sunset. All you have to do is bring your thick clothes to the top even in the summer. Immediately after the birth and sunset of the sun, the summit gets quite cold.

We wish everyone a pleasant journey!