Kazakhstan - When and How to Go?

Kazakhstan is an independent state located in Central Asia. Today, it is one of the seven independent Turkish states. It is the ninth largest country in the world in terms of area. Kazakh and Russian are spoken in the country, whose capital is Nur-Sultan and known for its population of more than 18 million. If you want to visit Kazakhstan, you need to have some information before going to the country. Here we have compiled this information for you. If you're ready, let's start…

First of all, visas are not required from Turkish citizens for 30-day trips to Kazakhstan. A passport is sufficient to travel to the country. In addition, if there is a stay in the country for more than 5 days, it is obligatory to register with the immigration police from the day of entry into the country.

Let's take a look at how to get from Turkey to Kazakhstan. There are direct flights of 5 and a half hours from Istanbul Airport and Sabiha Gökçen Airport to Almaty Airport, in the easternmost part of the country. The fact that the country has many places to visit makes Almaty Airport flights more preferable. However, if you want to set foot on the western side of the country first, it is possible to reach Aktau Airport, which is in the westernmost part of the country, from Istanbul Airport with a 3-hour direct flight. To reach Almaty from Aktau Airport, a train journey of up to 2 days or a more costly 4-hour direct flight can be tried.

It is possible to reach the center of Almaty, which is 30 kilometers from Almaty Airport, in 1 and a half hours by using public transport buses that depart every 15 minutes. Although there are unofficial taxi drivers who rush to pick you up as a customer when you set foot at the airport, if you are going to use a taxi, the safest method is to use official taxis. If you want to rent a private car, you can use various companies at the airport. But never forget to carry your international driver's license with you.

There are bus, trolleybus and metro alternatives for public transportation in the city in Kazakhstan. If you prefer to see the important places of the country by private car, you can bargain and rent a car at reasonable prices. In addition, in some cities such as Almaty, Nur-Sultan and Shymkent (Shymkent), it will be a different option to see around by renting a bicycle. It can also be said that local flights for long distances in the country have a very good connection.

In the country where the continental climate is dominant, the drier the summers, the harsher the winters. The best months to visit the country are generally from May to September. In addition, if you prefer to go to Kazakhstan during the ski season, December, January and February are the most ideal times. If you are a nature enthusiast who wants to see natural beauties, it would be logical to choose the spring months. While it reaches -20 degrees in the northern regions in winter, the temperature rises above 30 - 35 degrees in the continental parts in summer. Depending on the purpose of your visit and the season you want to visit, you can enjoy this beautiful country. The period from June to September is ideal for nature walks, and from April to October for horseback riding.

The Koshpendis Realm Festival (International Nomadic Culture Festival) held in the capital at the end of June, the Astana Evenings International Art Festival accompanied by concerts and colorful shows at the beginning of June, the Almaty Apple Festival in September, the Nauruz Festival in mid-March, where dance, food and songs play the leading roles, promote tent culture. The Almaty Tent Festival in May can be considered as some of the special times that can be chosen to go to Kazakhstan. In addition, the Apple Festival, one of the country's agricultural products, stands out as another activity that may attract attention in mid-September.

With its unspoilt nature, beauties to be discovered and every point going deep into history, you can be sure that Kazakhstan will offer you exquisite memories that will stay in your mind.

What is the Ideal Time to Visit Kazakhstan?

Kazakhstan is a country with a continental climate, so the best times to visit are spring and summer. If you want to visit Turkish culture and Turkish pastures, you can also choose to go in winter. However, we can say that the highest season of the country's tourism is in September.

In Kazakhstan, which does not have a coast, winters are quite harsh. Especially in January, we can say that the air temperature reaches -19's. 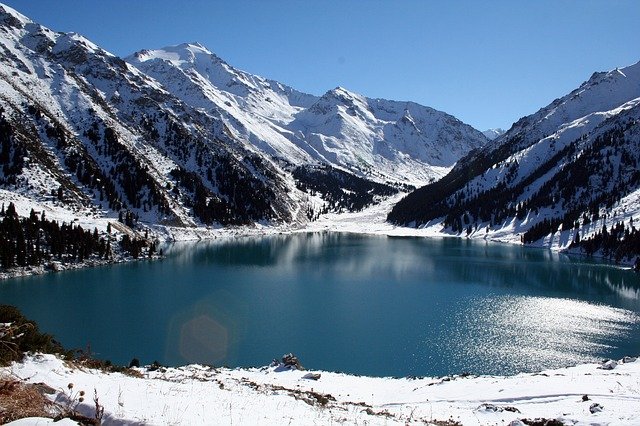